Michigan bicyclist deaths increased 15 percent in 2016, according to a new traffic crash report from the Michigan Office of Highway Safety Planning. 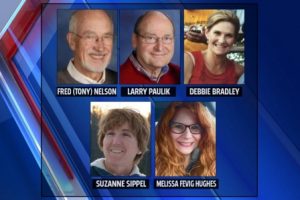 Last year’s numbers included the Kalamazoo bicycling tragedy, in which five cyclists were killed on June 7, 2016, when their group ride was struck from behind by a pickup truck. Four other cyclists were also injured that day. The driver of the truck has been charged with numerous crimes, including operating a vehicle under the influence of a controlled substance.

June 11:       A cyclist was struck and killed while participating in an organized ride in Eaton County.

June 24:       A cyclist was killed by a hit-and-run driver in northwest Detroit.

July 26:        Eric Snider, a former elite master’s racer, was struck and killed while commuting to work in Clinton County.

August 7:     A cyclist was killed while riding on the shoulder of US-31 in Emmet County.

August 17:   Charles Driggers, a 66-year old triathlete, was killed while training for the Ironman Triathlon when he was struck from behind by a hit-and-run driver (who was later found, arrested and charged).

August 26:   Karen McKeachie, a world champion triathlete, was killed by a truck that crossed the center line in Washtenaw County.

October 3:    A cyclist was killed by a hit-and-run vehicle in Hazel Park.

October 7:    Two cyclists were killed by a driver who struck them from behind in Jackson County.

October 24:   A 19-year-old cyclist was killed when hit by a passing vehicle in Lenawee County.

November 3:  A 17-year-old cyclist died when hit by a city bus in Kalamazoo.

November 3:  A cyclist was killed when hit by a car in Ottawa County.

November 5:  A cyclist was killed by hit-and-run driver in Macomb Township.

The growing number of Michigan bicyclist deaths is unacceptable and Bike Law Michigan believes it is time to find real solutions to the problem.

One way to find answers is through the League of Michigan Bicyclists (LMB), which works year-round to advance a legislative agenda aimed at protecting bicyclists.

You can be part of the effort to reduce Michigan bicyclist deaths and injuries by attending the Lucinda Means Bicycle Advocacy Day on Wednesday, May 24, 2017. This year’s legislative priorities include (subject to change):

If you have questions about Bicycle Advocacy Day, contact John Lindenmayer at john@LMB.org.