Cooperation is key in handling bicycle accident cases, especially when working with an attorney in another state.

Cyclists understand the power of numbers and teamwork. The peloton will always be faster than a single rider. A break with numbers is more likely to succeed than a solo effort. An individual time trial will never be as fast as a team time trial with each teammate pulling his or her share and playing off each other’s strengths. 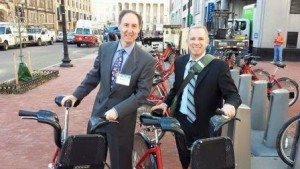 I was recently reminded that teamwork counts in my daily work as a lawyer representing bicyclists. I received a call from a former collegiate bicycle racer who was injured toward the end of a solo training ride in Denver. As he was heading home, a car failed to see him and made a left turn directly in his path causing him to be severely injured. I knew there would be challenges with his case. It was likely dusk and the cyclist didn’t have lights on his bike. Even in a pro-cycling community like Denver, we would have to work against the inherent prejudice against cyclists. I also knew the case would need immediate attention and that I would need to work with a local attorney who could do the necessary ground work over the next several weeks. I could have easily searched the internet and found an attorney who rides bikes and holds himself/herself out as a bicycle lawyer, but this would not confirm that the lawyer knew how to handle an injury case. I could call lawyers and ask for recommendations for a good injury attorney, but it would be hard to find one who understands the concerns of cyclists and the issues they commonly face. Thanks to my affiliation with Bike Law, I didn’t have to worry about searching for top-notch co-counsel and could immediately get to work with an excellent lawyer, avid cyclist, and true teammate.

Bike Law Colorado lawyer Brian Weiss is the real deal. He has litigated personal injury cases for over 20 years. Like this injured cyclist, he was a college athlete and is passionate about the rights of cyclists. Further, Brian gives back to the Colorado bicycle community and currently serves as the President of the Evergreen Cycling Club, best known for organizing the Triple Bypass Ride and Mt. Evans Hill Climb.

After my initial call to Brian, he hit the ground running. Brian met with our client, visited the scene of the crash, and began collecting evidence. He consulted with me at every critical stage to discuss strategy and decision-making. Just as important, he made all the right moves and kept our client informed every step of the way.

In the end, due to Brian’s work, we were able to obtain the maximum amount available to our client from the driver’s insurance company. However, Brian wasn’t done. Thanks to his deep understanding of insurance issues unique to Colorado, he was able to successfully negotiate a second settlement for the maximum allowed under an underinsured motorist policy purchased by our client’s father.

Congratulations on a job well done, Brian! Your work on this case is just one more reminder of why I chose to be part of the Bike Law network of attorneys.