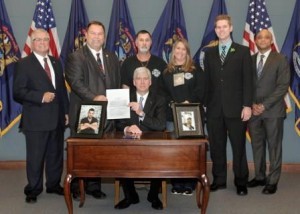 Photo courtesy of the League of Michigan Bicyclists

Yesterday, Governor Rick Snyder signed Public Act 317, the Nathan Bower Act, in Lansing, Michigan. It is now mandated that in addition to the standard driver’s education curriculum currently taught to future Michigan drivers, information about motorcycle and bicycle awareness and safety must be included. Students will be taught the importance of motorists being aware of their surroundings while driving on Michigan roads.

As we have noted previously, the Act is named after Nathan Bower, a 19-year-old man who tragically lost his life after being struck by a motorist while riding his motorcycle in 2009. The original bill, HB 5438, was co-sponsored by 89 out of 110 Michigan representatives. However, State Representative Terry Brown (D-Pigeon), who sponsored the bill, was instrumental in championing the Nathan Bower Act. As you may recall, it passed unanimously in the Michigan House and Senate before heading to the Governor’s Desk for his signature yesterday morning. In addition to Rep. Brown’s leadership, advocacy efforts by organizations such as the League of Michigan Bicyclists, as well as from those in the broader Michigan bicycle community, made a significant impact in making this Act a reality.

The signing of this Act ends a long journey for supporters of this bill, and hopefully, it is a sign of things to come. As we mentioned recently, there are two other pieces of pending legislation that would go a long way to protecting the more vulnerable users of our roadways. Given the momentum and energy that has been generated by proponents of the Nathan Bower Act, it would be great to see renewed efforts to get additional protections passed. After all, regardless of whether you are a motorist, motorcyclist, or bicyclist, we all have an interest in making Michigan a more bicycle-friendly state, and making Michigan roads safe for everyone. As Governor Snyder said of Nathan’s Law: “[This] will help save lives and raise awareness of the need to be alert and responsible when behind the wheel.”