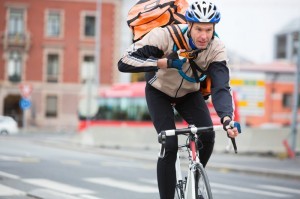 Cycling continues to be on the rise as many individuals, both in the United States and abroad, turn to it as a reasonable, healthier transportation option. As the number of cyclists has increased over time, unfortunately so has the number of accidents, injuries, and fatalities suffered by them. In 2012, over 3000 people were either injured or killed on Britain’s roads – 500,000 individuals choose to cycle in London.

This staggering statistic inspired one young inventor, Emily Brook, to create Blaze, a front mounted LED light that projects a green laser image of a bicycle onto the road to warn motorists that a cyclist is approaching.

Although the development of this technology is certainly welcome, perhaps a change of attitude, or even a bit of education, is also in order. For example, in Michigan, both motorists and cyclists are entitled to use the roads (unless otherwise prohibited by law) – cyclists have an absolute right to use public roads in Michigan. As such, motorists must share the road and be cognizant of those who choose to bike.

Michigan cyclists should also do their best to be seen and realize that they may have to take more defensive measures in order to protect themselves (wearing the proper reflective gear, having the appropriate lights and reflectors on their bicycles). When on the road, bicyclists should remember to ride as close to the curb as possible (there are exceptions, though). Lights are required if riding thirty minutes after sunset and thirty minutes before sunrise. Although cyclists are allowed to ride on the sidewalks (unless otherwise prohibited by law), they must remember that pedestrians have the right of way, and there are particular rules they must follow when passing or overtaking pedestrians with whom they alsoshare the sidewalk.